I’ve been getting into voiceover projects lately, and it’s time I documented my recording setup. For those new to this subject, the key challenge in making high-quality voice recordings is setting up a “treated space.” There’s a whole literature on sound treatment, but the essence of it for this purpose is to kill all echoes in the recording room.

My carpeted home office sounds like it has fine acoustics on my podcasting mic, but with even a prosumer-quality voiceover mic, it sounds like I’m at the bottom of a well. For serious voice work, I needed to build a space surrounded by sound-deadening materials, and I wanted to do it as cheaply and quickly as possible.

There are numerous tutorials online about constructing a basic voiceover booth, but they all seem to include an idea that offends me as a former construction worker: using PVC pipe as a structural support. I will now embark on a minor tirade.

Thou shalt not apply structural loads to plumbing pipes.

The biggest problem with pipe is that it’s built and tested only for carrying fluids from point to point. It’ll withstand pressure from inside, but how much load can it carry on the outside before breaking? I don’t know. Neither do you. Neither does the manufacturer.

In addition, PVC is an unsustainably produced plastic, requires noxious glues to hold it together properly, and isn’t particularly cheap if you’re buying it in quantity.

Fortunately, there’s an inexpensive, universally available, sustainably produced material with known load-carrying specifications that can be worked with simple hand tools, nails, and screws: lumber. So that’s what I used to build my booth.

I bought a few warped 2x4s from the rejects bin at the local lumber yard, grabbed some scraps of other sizes from my own leftovers in the garage and shed, and got out my hand saw, screwdriver, hammer, and a handful of fasteners and hardware. For acoustic treatment, I picked up a couple of heavy moving blankets. A voice booth doesn’t have to look good, just sound good.

The photos show how I built it. 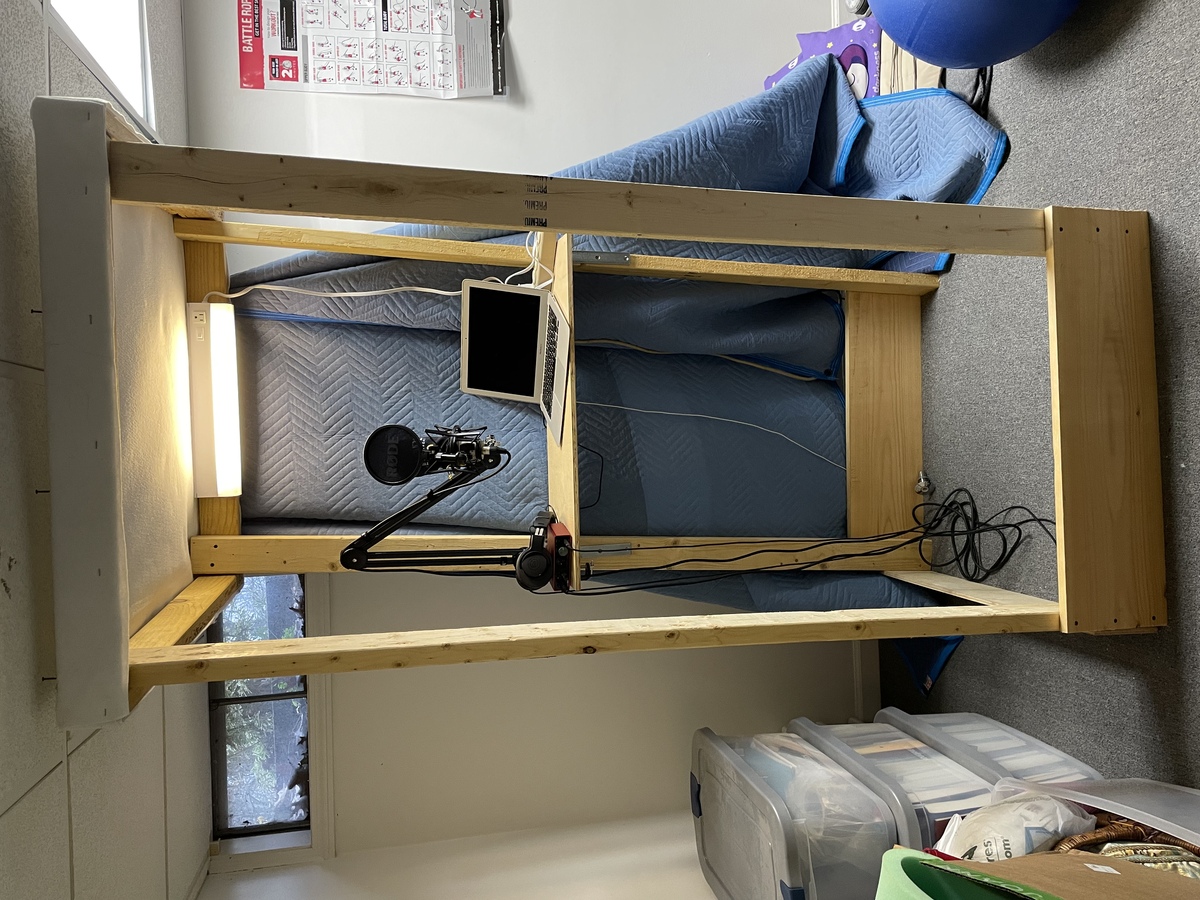 Here’s a photo of the finished booth in the corner of the (cluttered) basement, with the blankets mostly removed to show the structure. The white material on top is some cloth batting I stapled into place, because the blankets wouldn’t quite reach over. 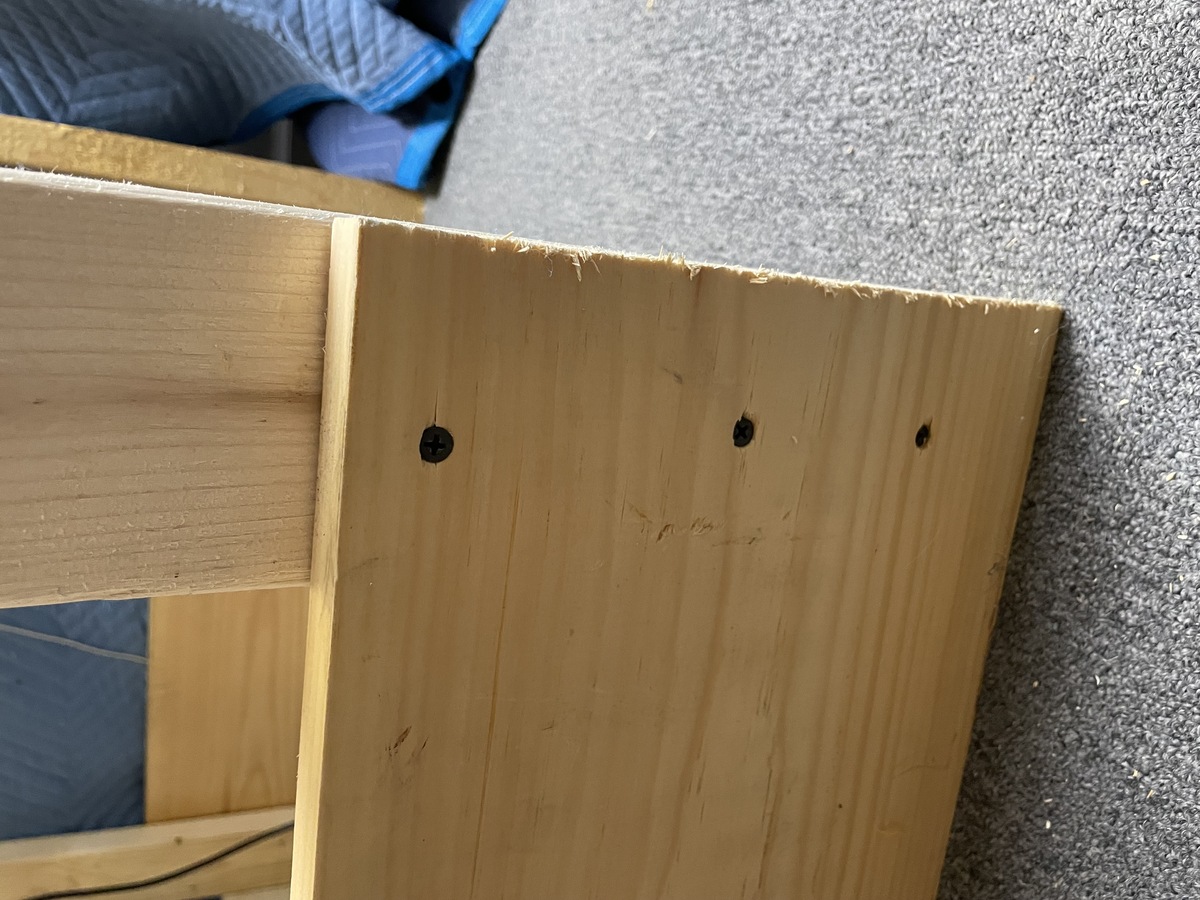 Screws hold most of the structure together. I had this 1x12 left over from another project, and it made a good brace around the bottom to keep the sides from racking. This would work just as well with nails, but the screws were handy and they’ll also be easy to remove when I want to move or modify the booth. 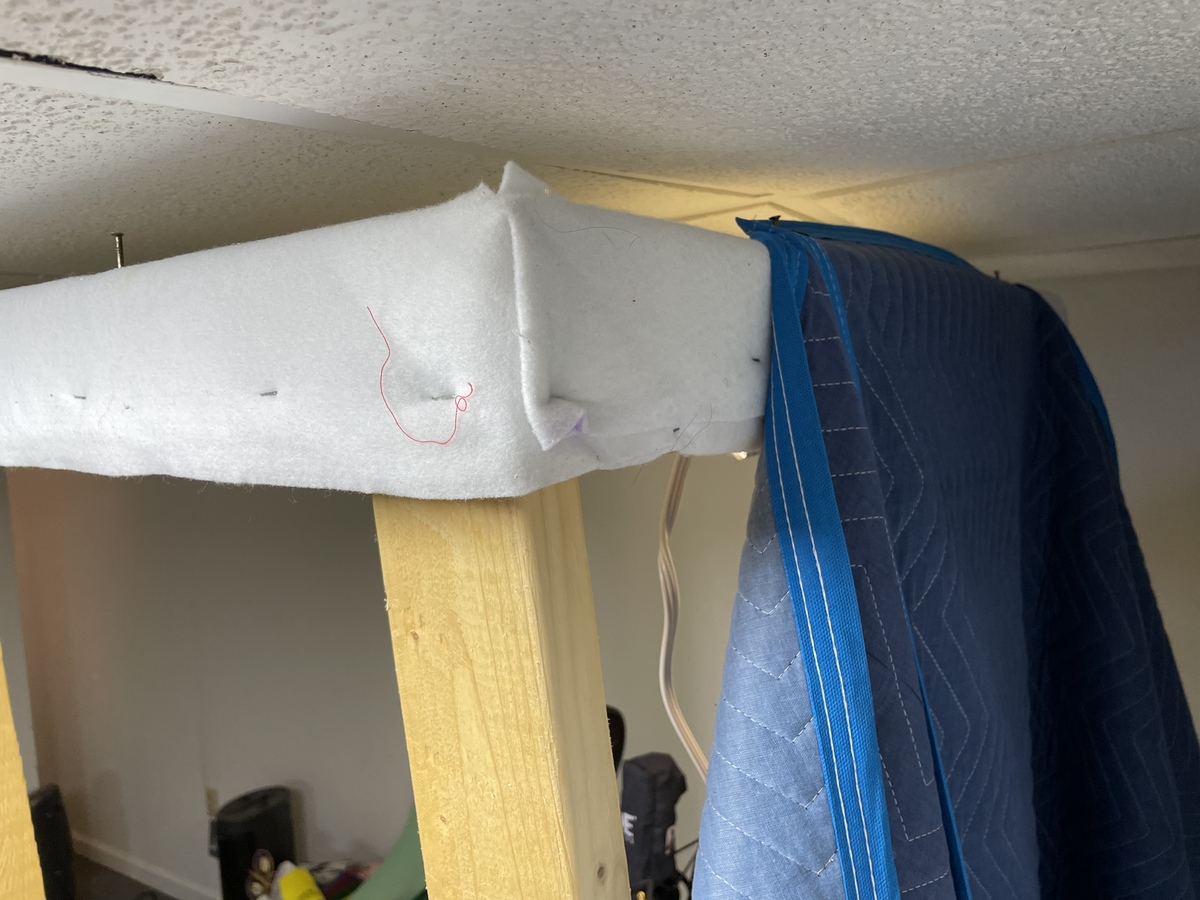 Around the top of the frame, I drove nails spaced to fit the grommets on the moving blankets. I overlapped the blankets, but it’s easy to part them like a curtain to step in or out of the booth. The blankets don’t quite reach the floor, so there’s a little bit of ventilation underneath. 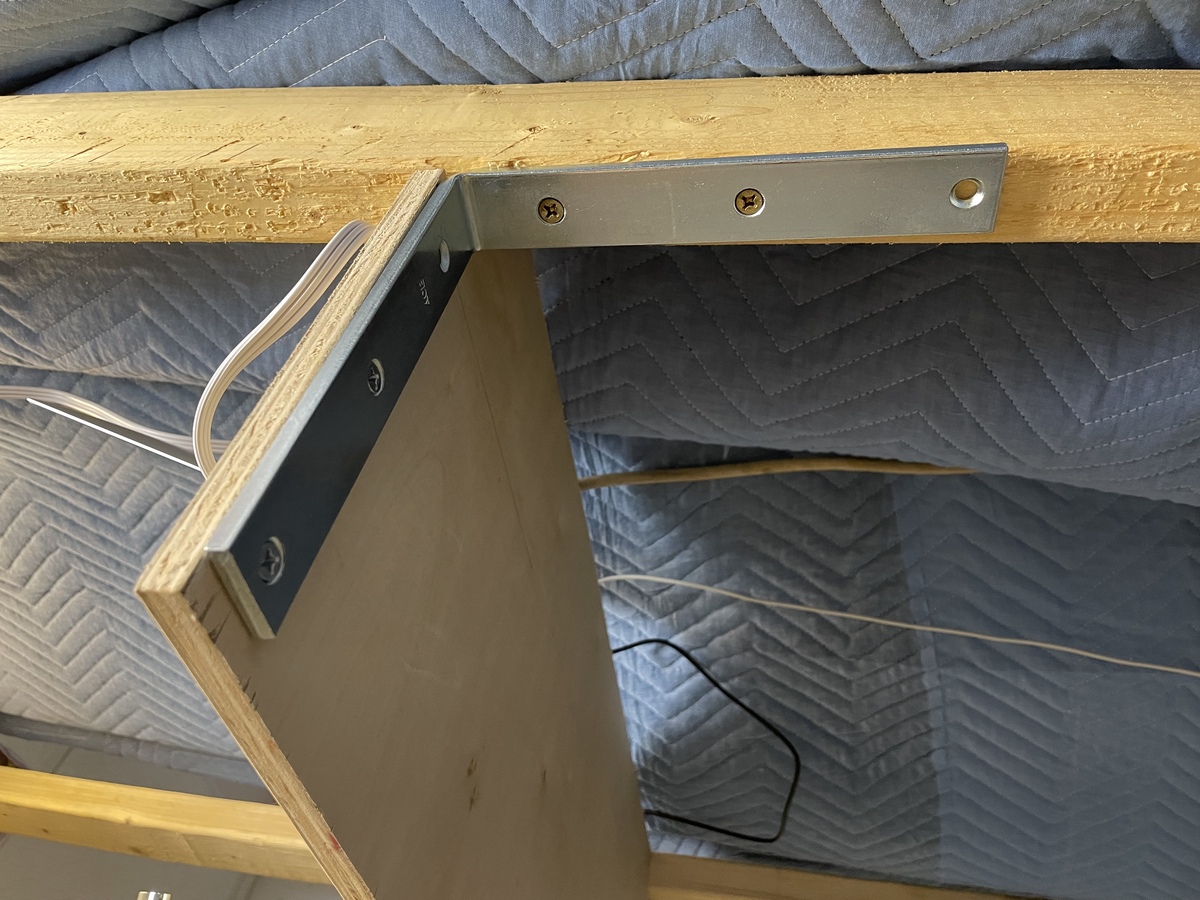 I had a couple of shelf brackets on hand, but if I’d been buying them specifically for this project, I probably would’ve gone a little smaller. In any case, these support a shelf made of scrap plywood, at a comfortable height for a standing desk. That holds the recording computer, microphone boom, and audio interface. 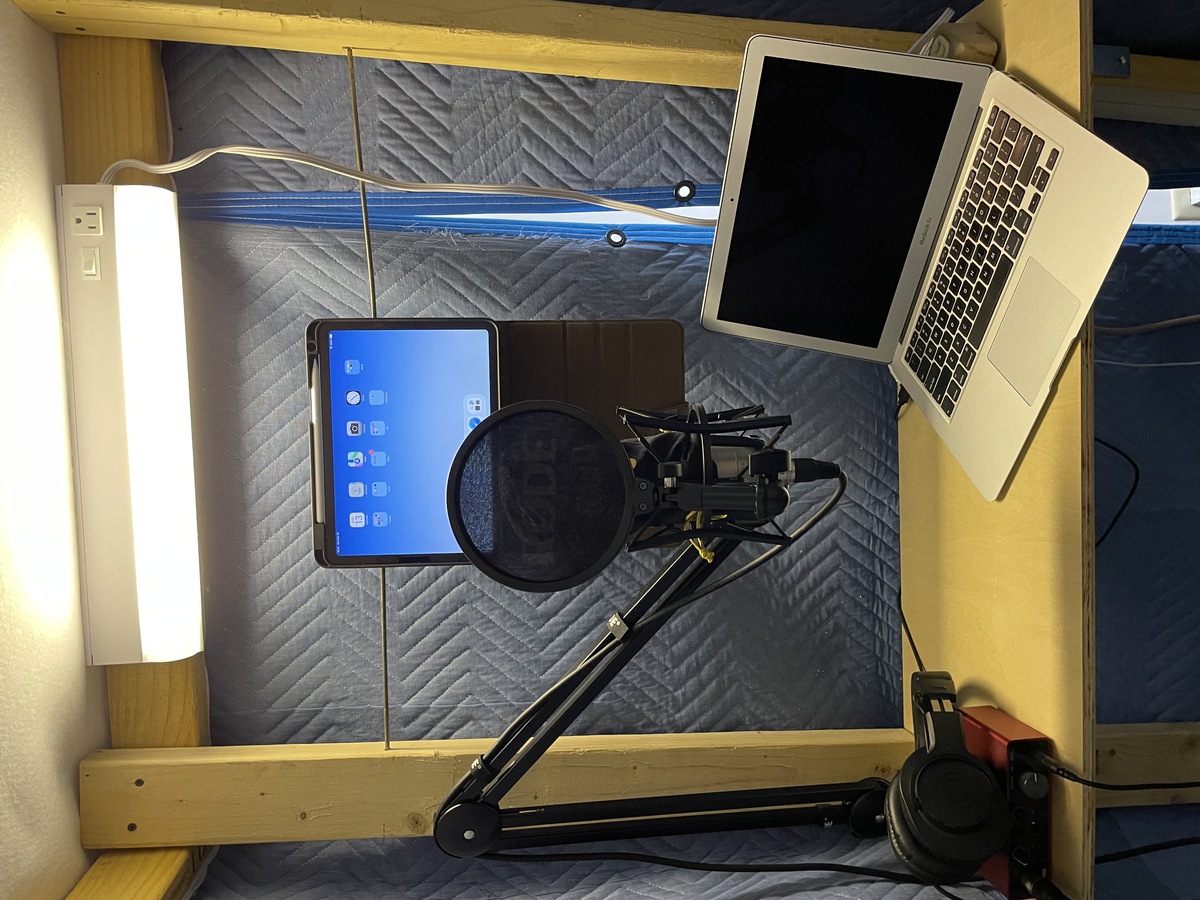 Here’s the final setup. I just recently added the rod across the back, which I can hang my iPad from by its folio-style case. That lets me put the script at eye level when I’m facing the mic, while the recording computer is to my right. The overhead light isn’t strictly necessary, but it would be pretty dark in there without it.

The recording computer, by the way, is a decade-old MacBook Air that now runs Linux. It does a lovely job recording with Audacity, and it’s silent.

People who know what they’re talking about have told me that the booth’s audio quality is fine, with no unpleasant resonance or echoes. In addition to audiobooks, I’ve recorded voiceovers for some small indie video games in there, as well as all of my homework for a voiceover class I took this Fall. If I keep doing this, I may want to build a more permanent and sophisticated booth, but at least I know this one won’t collapse on me.